Have you ever wondered what it would be like to be friends with Obi-Wan Kenobi? Well I don’t have to, cuz he’s my pal. This comic chronicles our sometimes exciting, but more often than not, mundane exploits. 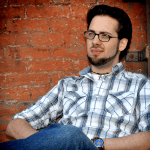 His obsession with Star Wars began when he was 9 years old, on a trip from Vancouver to the Okanagan. Amongst the many cassette tapes in a basket in the backseat of his parent’s car, he discovered a copy of the Star Wars (A New Hope) soundtrack. He Fell in love with the music just in time for the release of the THX remastered release of the Original Trilogy. Since then, Star Wars has been an integral part of everyday life for Michael. He now hosts two podcasts about Star Wars, Frontlines: The Clone Wars Podcast and The Rebels Podcast, as well as being actively involved in the fan community.