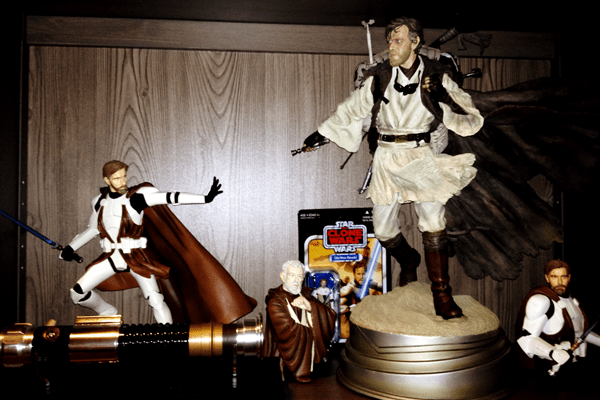 The crown jewels of my Kenobi Collection.

May the Fourth Be With You!

Today is May the Fourth, otherwise known as Star Wars Day! Star Wars Day is quickly becoming one of my favorite days of the year, as it seems to be gathering up steam and becoming a more mainstream event. I know some people will celebrate by watching the Star Wars movies with friends, and others will commemorate the day with outings to local comic shops dressed in their best Star Wars costumes. But me, I decided that Star Wars Day 2014 would be the perfect day to launch Kenobi and Me!

This comic has been a long time coming. Back in September 2013 I attended PAX Prime with my wife and a whole cadre of friends. It was first during the Strip Search panel that I started thinking, “Hey, I could be one of those artists up there… what’s stopping me?” And then during the Draw a Strip panel I saw Mike Krahulik using a Microsoft Surface to draw Penny Arcade. It was then that I resolved to launch my own comic. In pursuit of that goal I purchased a Surface Pro 2 and started working on ideas. But nothing seemed to be working for me.

Then inspiration hit! I was browsing tumblr one day when I came upon This Post. I though to myself, if Lucasfilm isn’t going to call up Ewan McGregor to be in the new Star Wars films, then I would love to call him up and have him come hang out with me, dressed as Obi-Wan Kenobi. It was out of this thought that Kenobi and Me was born. I started developing the character models and style and I haven’t looked back since. We’re launching with 4 comics today, for May the Fourth, and I’ve already got a whole Quiver full of ideas for more. To quote Han Solo, “This is where the fun begins.”